OAKLAND, Calif. and TORONTO, Feb. 10, 2022 /CNW/ - Harborside Inc. ("Harborside", or the "Company") (CSE: HBOR), (OTCQX: HBORF), a California-focused, vertically-integrated cannabis enterprise, is pleased to announce the closing of the first tranche of its previously announced US$77.3 million debt financing (the "Roll Up Financing") with Pelorus Equity Group ("Pelorus") and to provide a business update, including with respect to the proposed acquisitions of UL Holdings Inc. ("Urbn Leaf") and LPF JV Corporation ("Loudpack") to form StateHouse Holdings ("StateHouse"). 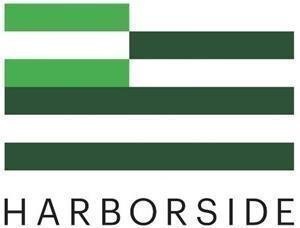 Roll Up Financing
On February 10, 2022, Harborside closed the first tranche of its Roll Up Financing with Pelorus on the terms described in the Company's news release dated November 29, 2021.

"With the Roll Up Financing, we are unlocking significant value from our combined real estate portfolio, and positioning StateHouse to be a leading consolidator of California's cannabis sector," said Matthew Hawkins, Chairman and interim CEO of Harborside. "We are pleased that Pelorus recognized the value of our assets, including over $100 million in real estate value and the potential of our growth strategy. We look forward to a long and productive partnership with the firm."

"We believe that StateHouse will be well-positioned for long-term success in the California cannabis market," said Travis Goad, Managing Partner of Pelorus. "We are excited to help the company achieve its growth objectives with this innovative financing solution, which is one of the first in our new lower cost stabilized lending program."

Assuming the Company receives requisite shareholder approval for the Transactions at the Meeting, the Transactions are expected to close on or around March 2022, subject to approval from the Canadian Securities Exchange, regulatory approval and satisfaction of other customary closing conditions.

Termination of Private Placement
With the closing of the Roll Up Financing and the Company's access to an additional $31.9 million of working capital after closing of the Transactions, Harborside has chosen to terminate the proposed US$10 million private placement financing of equity units, as described in the Company's press release dated November 29, 2021.

Renewable Energy Microgrid Project Update
Harborside has made a major enhancement to its planned commercial-scale, renewable energy microgrid project (the "Solar Project") at its 47-acre production campus in Salinas, California (the "Production Campus"), which was first announced on October 12, 2021.

The Solar Project is now being developed with a single axis tracker system, rather than a fixed tilt system as was initially conceived. This will enable higher power production from a smaller footprint, creating substantial cost savings. The Company now expects energy cost savings of 20% in the first year of operation when compared to the Company's current annual energy costs, with cumulative net energy savings of more than US$15 million over 20 years of operations, assuming 4% annual cost escalations for grid supplied energy. The Company previously anticipated cumulative net energy savings of US$12.5 million over this period.

Management continues to anticipate completion of the Solar Project in the second half of 2022, assuming there are no material delays resulting from supply chain issues, availability of labor, impacts of COVID-19 or other unforeseen events.

Departure of Board Member
Alexander Norman is resigning from Harborside's board of directors (the "Board") effective February 25, 2022, subject to shareholder approval of an amendment to the Company's bylaws at the Special Meeting of Shareholders scheduled for February 22, 2022. Mr. Norman is leaving to pursue other opportunities as the Company prepares to reconstitute its Board with directors from Loudpack and Urbn Leaf following closing of the Transactions.

"When I joined the Board as part of a refreshed slate of directors in November 2020, we were tasked with reinvigorating Harborside," said Mr. Norman. "That job has been accomplished, and the Company is now in a position to complete two transformational acquisitions. The new Board will have deep industry talent, and I am confident that they will lead StateHouse to tremendous success."

"On behalf of the board of directors, I want to thank Alex for his substantial contributions to the repositioning of Harborside," added Mr. Hawkins. "We wish him the best in his future endeavours."

Share Issuance Related to Sublime Acquisition
In accordance with the post-closing conditions associated with the Company's acquisition of Sublimation Inc. ("Sublime"), completed in July 2021, the Company has issued an additional 11,289.57 multiple voting shares of Harborside to the former shareholders of Sublime in satisfaction of certain working capital adjustments. In addition, and in accordance with the merger agreement with Sublime, options to acquire common stock of Sublime were converted into options to purchase up to 84,420 subordinate voting shares of Harborside.

For the latest news, activities, and media coverage, please visit the Harborside corporate website at http://www.investharborside.com or connect with us on LinkedIn and Twitter.

About Harborside:
Harborside, a vertically integrated enterprise with cannabis licenses covering retail, distribution, cultivation, nursery and manufacturing, is one of the oldest and most respected cannabis companies in California. Founded in California in 2006, Harborside was awarded one of the first six medical cannabis licenses granted in the United States. Today, the company operates three major dispensaries in the San Francisco Bay Area, a dispensary in the Palm Springs area outfitted with Southern California's only cannabis drive-thru window, a dispensary in Oregon, a manufacturing facility in Oakland, California, distribution facilities in San Jose and Los Angeles, California and an integrated cultivation/production facility in Salinas, California. Harborside is a publicly listed company, trading on the Canadian Securities Exchange ("CSE") under the ticker symbol "HBOR" and the OTCQX under the ticker symbol "HBORF", and the Company continues to play an instrumental role in making cannabis safe and accessible to a broad and diverse community of California and Oregon consumers. Additional information regarding Harborside is available under Harborside's SEDAR profile at www.sedar.com.

Cautionary Note Regarding Forward-Looking Information
This news release contains "forward-looking information" and "forward-looking statements" (collectively, "forward-looking statements") within the meaning of the applicable Canadian and United States securities legislation. All statements, other than statements of historical fact, are forward-looking statements and are based on expectations, estimates, and projections as at the date of this news release. Any statement that involves discussions with respect to predictions, expectations, beliefs, plans, projections, objectives, assumptions, future events or performance (often but not always using phrases such as "expects", or "does not expect", "is expected", "anticipates" or "does not anticipate", "plans", "budget", "scheduled", "forecasts", "estimates", "believes" or "intends" or variations of such words and phrases or stating that certain actions, events or results "may" or "could", "would", "might" or "will" be taken to occur or be achieved) are not statements of historical fact and may be forward-looking statements. In this news release, forward-looking statements include, among other things, statements with respect to the completion of a second tranche of the Roll Up Financing, the completion of the proposed Transactions and formation of StateHouse, the future success of Statehouse, timing for completion of the proposed Transactions and formation of StateHouse, whether the Company will receive shareholder approval at the Meeting, cost savings at the Solar Project, timing of completion of the Solar Project, future performance, growth, profitability, competitive position, and acquisition opportunities, and the Company's corporate strategy moving forward.

While the approach to enforcement of such laws by the federal government in the United States has trended toward non-enforcement against individuals and businesses that comply with recreational and medicinal cannabis programs in states where such programs are legal, strict compliance with state laws with respect to cannabis will neither absolve the Company of liability under United States federal law, nor will it provide a defense to any federal proceeding which may be brought against the Company. The enforcement of federal laws in the United States is a significant risk to the business of the Company and any proceedings brought against the Company thereunder may adversely affect the Company's operations and financial performance.